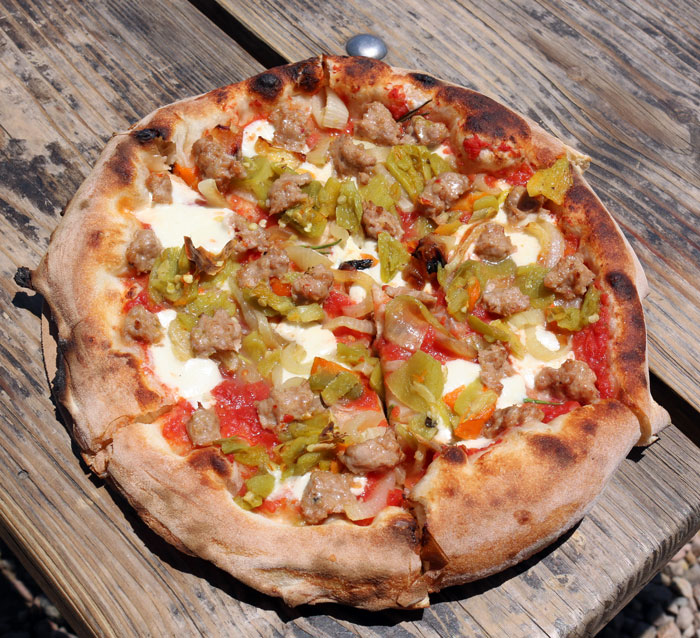 Jethro Bodine, the country bumpkin with diverse career aspirations (brain surgeon, street car conductor, ‘double-naught’ spy, Hollywood producer, soda jerk, and bookkeeper) on the Beverly Hillbillies television comedy graduated highest in his class by a whole foot or more. You couldn’t get much past the sixth grade educated “six-foot stomach.” When a math teacher posited the theory of π r2 (pi r squared), Jethro wasn’t fooled: “Uncle Jed, them teachers is tryin’ to tell us that pie are square. Shoot, everybody knows that pie are round, cornbread are square.”

Jethro isn’t the only educated person to find pi irrational. The first to do so was Swiss polymath Johann Heinrich Lambert who proved that the number π (pi) is irrational: that is, it cannot be expressed as a fraction a/b, where a is an integer and b is a non-zero integer. It’s quite possible that the only people who understand that sentence are my friends Larry McGoldrick, the professor with the perspicacious palate and Bill Resnik, a New Mexico Institute of Technology-trained mathematician. For me, all math beyond statistics is irrational; it makes absolutely no sense.

I did know enough to grin like the proverbial cat who ate the canary when apprised of a food truck named Irrational Pie. It’s apparent owner Josh Rood-Ojalvo is not only a pretty bright guy, but that he’s got a pretty good sense of humor. Eight out of ten (my proficiency at statistics on display here) probably couldn’t tell you what the name “Irrational Pie” means…not that pizza aficionados should even care. Ten out of ten pizza paramours will love the pizzas proffered at this playfully named purveyor of pies. That’s pie, not pi.

Since it launched in January, 2014, you can find Irrational Pie parked at some of your favorite breweries and at such events as Tasty Tuesdays, a fun, food and frolic fest that brings people together out-of-doors. You can’t miss this food truck whose “mascot” is a neon-green moose whose antlers frame the truck’s name. This is a truck which announces its presence well in advance of when you actually see it. The aroma of hickory burning is akin to a siren’s call beckoning sailors. That aroma may remind you of the campfires of your childhood. Irrational Pie burns hickory not only because of its olfactory properties, but because it burns hot which means you won’t wait long for your pie.

You can’t miss the oven in which that fragrant hickory burns so brightly. It’s a 3000-pound brick-based behemoth made in Italy and it occupies the back-end of the truck’s interior. The enticing smoky aroma emanating from that oven will waft over you, perhaps triggering involuntary salivation. As you queue up, you’ll have the opportunity to peruse the menu scrawled on a slate board. There are only a handful of pies listed, but you can also customize your pie with the toppings of your choice. You won’t have to wait long before you made-to-order pie is delivered to your table.

The dough for each pizza is made from scratch with local, organic ingredients whenever possible. Each pie is a personal-sized ten-inch pizza with the pepperoni-green chile pizza being the best seller. Seasonal specials are available with fresh ingredients specific to the time of year. One ingredient (two if you count green chile) not to be missed is wood-roasted onions. The tomato sauce which graces each pie isn’t your typical thin, runny sauce, but has the texture and flavor of finely crushed and seasoned tomatoes. It does make a difference.

As has become characteristic of thin pizzas prepared at high heat, your pie will have a nice amount of char along the edges (in New Mexico, char is a flavor). The cornicione, an Italian term for the “lip” or puffy outer edge of the pizza is pronounced and uneven, soft and chewy, and best of all, has the flavor and aroma of just baked bread. My introductory pizza, constructed with sausage, wood-roasted onions and green chile (a no-brainer) quickly thwarted my plan to save two or three slices for later. The wood-roasted onions are cut into strips about an inch-long so you can really taste their sweet properties. The green chile has a pleasant piquancy and nice roasted flavor while the sausage is generously applied.

My Kim’s choice was the Margherita (the forerunner of pizza everywhere) to which she added those wood-smoked onions. As with all Margherita pizzas, it’s constructed with mozzarella, basil and smashed tomatoes. Wood-roasted onions should also be requisite though it would no longer be a Margherita. By any name, this is an excellent pie–even without any of my favorite proteins (pepperoni, Canadian bacon, ham, sausage, etc.). It’s so good even my Kim (who’s far more disciplined about saving a couple slices for later) finished the entire pie…though being of clearer mind than her hungry husband, dissuaded me from ordering something from the Salvadoran food truck parked next door. That’s an adventure for later.

Whether you’re of a rational or emotive bent, Irrational Pie is an excellent option. It’s never irrational to enjoy one of the best pizzas in the Duke City.