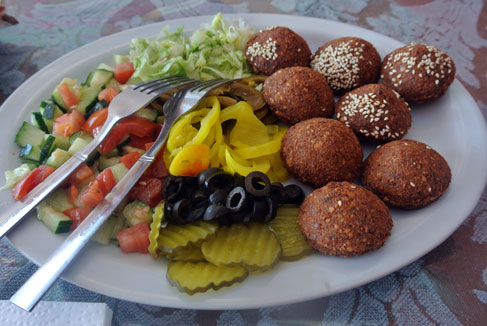 Legends recount that in his quest for immortality, Mesopotamian king Gilgamesh visited a tavern where a divine barmaid gave him the advise: “Eat and drink your fill, Gilgamesh, and celebrate day and night. Make every day a festival; day and night dance and play.” Because of the fecundity of their land, the people of Mesopotamia could indeed afford to eat, drink and be merry until they died–even if they were denied immortality.

The rich culinary legacy of ancient Mesopotamia (modern-day Iraq) can be traced back more than 10,000 years when the comparatively lush and fecund land constituting the fertile crescent gave rise to the cradle of civilization. The availability of water and agricultural resources allowed some of the world’s earliest human civilizations to flourish from both a societal and technological perspective. This region is credited with the development of writing, glass, the wheel and the use or irrigation.

Tablets found in ancient ruins throughout Iraq document recipes used in temple festivals, including a 3,700-year-old recipe for a meat pie baked in an unleavened crust. In what are essentially the world’s very first cookbooks, these tablets reveal a very large and gastronomically advanced civilization. A cuneiform script on 24 stone tables dated from about 1900 BC lists more than 800 different foods and beverages including more than 100 varieties of soup, 300 types of bread and 20 different cheeses–each with varying ingredients, shapes, fillings and sizes.

The picture of Iraq (formerly Mesopotamia) conjured in most peoples’ minds today is not of a verdant and fertile land, but of a desolate desert in which little grows. In truth, only about fifteen percent of Iraq’s acreage is arable with another ten percent being permanent pasture. Rain-fed irrigation is enough to cultivate the winter crops (mainly wheat and barley) which have long been a staple of the region. Valleys along the Tigris and Euphrates Rivers, whose headwaters some theorize was the site of Biblical Eden, account for about half of Iraq’s arable land

Culinary anthropologists have extrapolated from the ancient tablets that while the cuisine of Mesopotamia has evolved significantly, many of the dishes and preparation techniques from time long past can still be found today in Iraq. A visit to Ali Baba Food Mart in the far Northeast Heights may not magically transport you back to the bygone days of yore, but it will give you an appreciation for the cuisine of Iraq, most of which is very familiar. Moreover, you’ll be treated to Iraqi hospitality (and if you’re fortunate, you may even meet Amira, the precocious daughter of Ali Baba’s owners).

Named for the character in Ali Baba and the Forty Thieves, Ali Baba is located next door to the Red Rock Deli on Lomas just west of Tramway. Signage indicates it’s a food mart and indeed, about half of the store’s real estate is devoted to comestibles. The other half houses a very charming, ornately decorated dining room unlike any in Albuquerque. It’s a magnificent milieu for dining on the restaurant specialties, some listed on the storefront signage: gyros, baba ghanoush, falafel, kabab, hummus, tabooli, fattoush and more.

Arabian bread is baked in a small back room. A cylindrical metal oven operates very similarly to the tandoor clay ovens of India in baking large flat bread more closely resembling Indian naan (about the size of a pizza) than Greek pita. As with tandoor ovens, rolled dough is slapped against the oven wall. Extricating it is a delicate (and sometimes painful) process. The resultant flat bread is wonderful with a pinto-pony char, a chewy texture and an addictive flavor. Mesopotamia, by the way, may have actually invented bread. The oldest known clay oven was excavated about 45 miles south of Baghdad. It dates to 4000 B.C. and was used to make the flat bread which was the progenitor of the bread we enjoyed.

Ali Baba doesn’t have tableside service. Instead you’ll place your order at a counter behind which a cook is shaving shards of meat from a rotating spit. Meats are prepared halal style and are procured from the Al Noohi company in California. The menu is rather limited, but you certainly can’t say that about portion size. Generous plating belies the outrageously reasonable prices. Call it “cheap eats” if you will, but only if your definition of cheap is “high quality and inexpensive.” As with the Red Rock Deli next door, two can eat very well for under thirty dollars and still have some to take home.

Start your introduction to the cuisine of Ali Baba with the amazing Falafel Plate (pictured above). Large enough to feed a small family, the plate includes eight deep-fried falafel balls, half of which are sprinkled with sesame seeds; sliced dill pickles, sliced olives, yellow peppers, jalapeños, lettuce and a cucumber-tomato salad. Almost as amazing as the generosity of the plate is how good the falafel are (equalled only by the falafel at the phenomenal San Pedro Middle East Restaurant). Both texturally (moist, but not oily with a crisp exterior and soft, parsley infused interior) and flavor-wise, each falafel will bring a smile to your face.

As good as the falafel is the baba ghanoush, a garlicky, smoky roasted eggplant spread popular throughout the Middle East. The melodic name baba ghanoush (fun to say even if you don’t know what it means) has its genesis in an Arabic phrase which translates to “pampered daddy” (not necessarily in a paternal sense). Baba ghanoush is made from grilled eggplant that is mashed and mixed with olive oil, lemon juice, garlic and tahini (a sesame seed paste). Ali Baba serves it with the aforementioned Arabic bread which you’ll dip into the spread and consume lustily. Interestingly, the baba ghanoush is served with a spoonful of chili (similar in heat to Sriracha) which goes well with the dip.

In a unique cultural interchange, Ali Baba serves its sandwiches on New Mexico-style flour tortillas instead of on pita or Arabic bread. Call it an Iraqi burrito if you will, but you’ll also call it delicious. On the shish kabab sandwich, the tortilla is engorged with grilled meat marinated in a combination of herbs and spices then sliced into small pieces and served finely chopped tomatoes, cucumbers and a lightly applied, but mouth-watering sauce. The shawarma, a tortilla sandwich with thinly sliced cuts of meat generously sprinkled with sumac is also quite good.