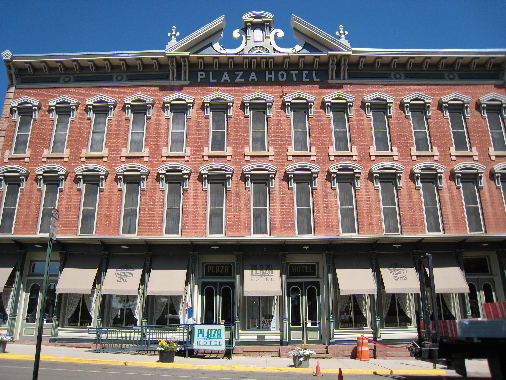 Historian Ralph Emerson Twitchell once wrote, “Without exception there was no town which harbored a more disreputable gang of desperadoes and outlaws than did Las Vegas.” At one time, Las Vegas was considered virtually lawless, a shameless denizen of murderers, thieves, swindlers, prostitutes and others of ill repute.

If you’re thinking I’m describing the formative days in which Las Vegas, Nevada was run by the Mafia, you would be understandably mistaken. The Las Vegas which earned an unparalleled reputation for lawlessness and corruption is Las Vegas, New Mexico, which is today a peaceful little city on the eastern fringes of the Sangre de Cristos, a city of 14,000 citizens which predates its Nevada counterpart by seventy years.

Founded in 1835, the “other” Las Vegas as it is often called bears no resemblance to its namesake. Most questionable dealings today occur in the political arena and not in the streets. Las Vegas, New Mexico is now known for its gentility, culture and history, although the city is more apt to celebrate its 900 structures on the National Registry of Historic Places than it is the killings that occurred on the street following the arrival of the railroad.

One of the city’s most genteel structures is the Plaza Hotel. Presiding on the southwest corner of the Spanish Colonial plaza, the Hotel was built in 1892 and was dubbed “The Belle of the Southwest.” The Plaza Hotel was the site of the first reunion of Teddy Roosevelt and his Rough Riders in 1899. It has had cameo appearances in dozens of western and cowboy movies filmed in the Las Vegas area, most recently featured in No Country For Old Men, the 2007 Academy Award winning movie.

The Plaza Hotel takes pride in providing modern amenities in a 19th century Victorian ambiance. Wireless high-speed Internet access, cable television with premium channels and elevators may seem out of place in elegant surroundings, but travelers and visitors apparently need to stay connected even more than they need to recapture the simplicity of a bygone era.

The Landmark Grill is the hotel’s signature restaurant, serving breakfast, lunch and dinner seven days a week in a tasteful Victorian dining room specializing in charcoal-broiled steaks and chops, New Mexican entrees, sandwiches and salads…even the occasional alligator. It is a popular dining destination for tourists and a special occasion restaurant for locals who appreciate the surprisingly good value for the quality.

East facing windows provide a wonderful panoramic view of the venerable plaza and its enormous gazebo in which public events are often staged. Service at the Landmark Grill is impeccable–on-the-spot and accommodating without hovering around you.

Our favorite time to visit is during Sunday brunch, served from 10AM to 2PM. The brunch menu includes all the traditional brunch offerings, many with special twists that make them just a cut above.

One such example is a malted waffle, a plate-sized waffle topped with homemade whipped cream and raspberry sauce. If it’s been a while since you last indulged in a very good waffle, this is an excellent candidate. Wisps of steam waft toward your nostrils as you cut into the waffle, an olfactory invitation to a good morning repast.

Another excellent and not necessarily traditional brunch offering are migas, two scrambled eggs sauteed with corn tortilla strips, ham, onion, green chile, bell pepper, Cheddar cheese and hash browns. The Landmark Grill’s rendition puts a New Mexico spin on a brunch offering more frequently found in Texas than in the Land of Enchantment. The green chile makes these migas! It’s green chile with a piquant bite, the kind of green chile which reminds you why you fell in love with New Mexico’s official vegetable.

The green chile is the star of the restaurant’s signature Blue Corn Enchiladas, two rolled enchiladas made with Cheddar cheese and your choice of beef, chicken or sour cream and red or green chile. Have this entree “Christmas style” so you can sample both the red and the green, but it’s the green you’ll appreciate most. This entree is served with Spanish rice and pinto beans practically covered in melted Cheddar cheese.

The restaurant’s salsa and chips are also quite good. The salsa is emboldened with jalapenos, but it is the “just right” amount of cilantro that gives it a pleasantly taste bud tantalizing flavor. Red, yellow and blue corn tortilla chips have two special touches. They are imbued with cayenne pepper and seasoned with sea salt. These chips are perfectly sized for mouth-sized scoops of salsa.

In addition to New Mexican entrees, the lunch menu includes a variety of salads, burgers, pasta dishes and even a quiche of the day. Some of the sandwiches are named for local celebrities, such as “Big Nose Kate,” the girlfriend of the notorious gunfighter Doc Holliday.

If the unnamed patty melt is any indication, you probably won’t go wrong with a sandwich. The patty melt is a half-pound of ground beef grilled to order and smothered with melted Swiss and grilled onion on rye. If, like me, you’ve ever lamented the fact that most patty melts in New Mexico tend to be made of desiccated beef and sawdust flour rye, you’ll love the Landmark Grill’s version. It’s fresh and juicy, replete with flavor. Every bite is an experience in enjoyment as this simple sandwich is just made perfectly.

Las Vegas, New Mexico may be the antithesis of Las Vegas, Nevada, but that’s just one reason you should visit. The Landmark Grill is another.