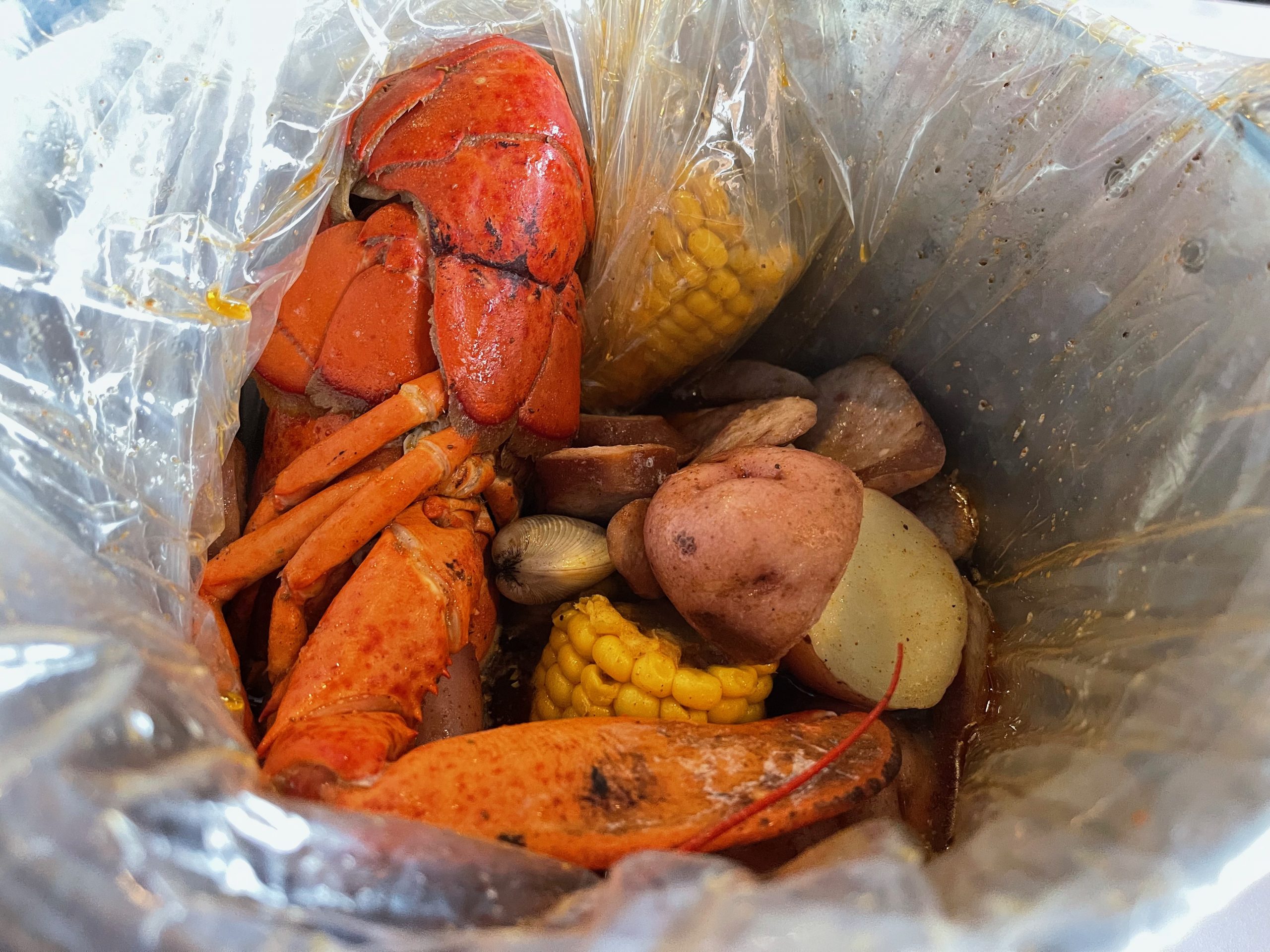 Archaeologists believe there’s a scientific explanation for contemporary  humankind’s  predilection for seaside vacations and trips to the beach.  Evidence–stone tools used to cut through animal flesh–seems to support the theory that the first humans migrated out of Africa by following the eastern coastline.  This, the theory posits, would have led to Australia being discovered before Europe.  As noted by Professor Chris Stringer, the head of human origins at the Natural History Museum in London: “The earliest evidence of modern humans in Europe is 40,000 years old whereas we find evidence dating to 60,000 years ago in Australia.  This (migrating along Africa’s eastern coastline) provides a possible explanation.”

In addition to the tools used by our beachcombing ancestors, the archaeologists found the remains of several edible marine animals, including oysters, mussels and crabs.  Whether or not this also explains humankind’s pescatarian propensities, many of us are passionate about seafood–and not in the way Dolly Parton meant when she proclaimed “I’m on a seefood diet.  I see food, I eat it.”  According to Seafood Source, “on average, Americans consumed 16.1 pounds of seafood in 2018, a per capita consumption rate of 16.1 pounds,  the highest since 2007.”  Shrimp remains the most popular of all seafood.

As children growing up in landlocked and agrarian Peñasco, my siblings and I led a very sheltered life.  Our extremely provincial experience with “seafood” was limited to Mrs. Paul’s fish sticks which we dipped in Kraft’s sandwich spread (we didn’t know about tartar sauce) and (gasp, the horror) Mrs. Paul’s fried shrimp.  Sure, we snared the legal limit (yeah, right) of German brown trout, cutthroat trout and rainbow trout in the cold, rocky waters of the mountain streams in our backyard, but that wasn’t “seafood.”  That was fish!

During my senior year in high school, my parents took me to a “fancy” (when you’re from Peñasco, back then this meant not Bonanza’s or Sizzling Sirloin) steak restaurant where instead of a slab of beef, I surprised them by ordering lobster thermidor.  Despite not having a clue what to expect, I quickly fell in love with the presentation of a red carapace generously stuffed with creamy, rich lobster.  The presentation quickly gave way to revelations in deliciousness my bumpkinly taste buds had never before experienced.  It was love and lust in every bite.  Pandora’s net having been splayed before me, I had to have more.

The United States Air Force had the answer to my prayers, stationing me at Hanscom, about seventeen miles northwest of Boston and much closer by eight-hundred miles to fresh, just-off-the-boat seafood.  For two years, I did my best Diamond Jim Brady imitation, devouring lobsters and crab by the pot, oysters by the sack, tuna subs by the truckload and so many fried clams my friend Paul Venne told me I’d eventually become a clam.  A few years later, my Kim and I were stationed on the Mississippi Gulf Coast where our proximity to seafood-rich waters could literally be walked. Succulent seafood courtesy of Air Force postings mitigated the pangs of missing New Mexico’s incomparable red and green chile.

Much as we loved the propinquity and promise of superb seafood, the siren’s call lure of the Land of Enchantment proved insurmountable.  We returned to La Tierra Encantada where over the years, we’ve seen seafood go from scarce and expensive to plentiful and reasonably priced, especially at mariscos restaurants.   Then in September, 2013, a revolutionary seafood concept named Down N Dirty Seafood Boil introduced Duke City landlubbers to a Cajun-style seafood boil.  In 2015, Crackin’ Crab Seafood Boil followed suit.

In February, 2020 (scant weeks before the world closed down), Storming Crab, Albuquerque’s third Cajun seafood boil restaurant launched its galley, this one in the commodious San Mateo edifice that previously housed Groundstone.  Unlike Down N Dirty and Crackin’ Crab, Storming Crab has a national presence with restaurants in Kentucky (including the original in Clarksville), New York, Ohio, Tennessee, Texas, Indiana, Missouri and Illinois.  There are currently nineteen Storming Crab restaurants under spacious skies.

As might be expected, the space has undergone a complete make-over.  Over-the-top nautical themes dominate.  Taut ropes, more than you’ll find in a rodeo, feature prominently in the theme.  So do helms, the “steering wheels” that control the course of a vessel.  A green kayak is suspended from the ceiling and a toothsome shark from another.  Graffiti, nearly as much as you’ll see under any of the city’s underpasses, is everywhere.  As you walk in, a Captain Jack lookalike (from Pirates of the Caribbean) glares at you from behind his wooden helm.

The menu is designed with five specific dinner combinations up front, all served with corn, potatoes and sausage.  Seafood options include crawfish and shrimp; Dungeness crab, shrimp and clams; a whole lobster, brown clams and crawfish; snow crab legs, crawfish and shrimp; king crab legs, crawfish and mussels; and snow crab legs, lobster tails and shrimp.  Each is priced by the pound, by market price. Each serves anywhere from one to two or two to three people.  There’s also a family combo which feeds Feeds five to six people: one pound each of king Crab, snow crab, green mussels, shrimp and white clams.

You can also opt for just one seafood item, be it mussels, crawfish, lobster or a choice from several types of crab.   Each individual platter includes corn and potatoes.  You can choose the flavor profile of your “sauce” from among crab house Cajun, garlic butter, Old Bay butter, Old Bay dry no butter or plain, and your spice level from mild to super hot.  If boiled seafood isn’t what you’re into, the menu also features classic fried seafood as well: calamari, shrimp, catfish, oysters and more.  Landlubbers can have chicken strips, too.  Fresh raw oysters also are available, not to mention a couple of Cajun dishes: gumbo and crawfish etoufee.

5 September 2020: As you’re perusing the menu,  two pieces of seafood bread are ferried to your table.  At first glance, seafood bread may look like cheesy garlic bread, but there’s much more to this staff of life than that.   The rich, creamy cheese on top is infused with crab, garlic and other herbs.  In short, it’s absolutely delicious, a precursor of what’s to come.  In addition to the seafood bread, our server equipped us with plastic disposable bibs emblazoned with a bright red crab, plus tools to help us extricate the delicate seafood from its spiny carapace. Two thick pieces of paper are laid out on your table to help contain the predictable and inevitable mess.

5 September 2020: But first, the appetizers.  Would it be crab cakes, hush puppies, onion rings or stuffed jalapeños? It certainly wouldn’t be (gasp) fish sticks for me. Nah, our choices were in honor of the two seaside locations the Air Force graciously assigned us to. First were clam strips, hand-breaded and deep fried as I loved them intensely in Massachusetts.  Even though these were not the whole belly clams I preferred, they were certainly not the desiccated, insipid clam strips (sorry, Bob) of Howard Johnson’s.  A lush, crunchy breading gives way to sweet, “meaty” clams that in my mind’s eye took me back to Massachusetts.  Similarly, the boudin balls (whiter link sausage, rice, vegetables, seasonings all deep fried) transported us to the first time we enjoyed the Cajun culture staple in Bayou country.  Though they resemble donut holes, these savory orbs have a surprisingly complex and intensely satisfying flavor.  They’re not quite as addictive as fried clams, but boy are they good!

Your food arrives in thick plastic bags inside a bucket. No plates are provided, just two bags brimming with seafood absolutely saturated with the sauce you selected (garlic butter for us). You’ll remove the seafood from the bucket which you’ll then use to discard the “empties.”  This is not refined eating.  Basically you just reach into the bag and extract what it is you wish to attack first.  Exercise a bit of caution, however.  This is steaming hot stuff that requires handling with care.

5 September 2020: My Kim and I opted for dinner combo 2, a “feeds two to three people” bounty comprised of a full-pound Dungeness crab, a pound of shrimp and a pound of clams along with a quarter-pound of sausage and three half ears of corn-on-the-cob.   Though your humble blogger usually eschews food which “requires work” to eat, Dungeness crab is an exception.  With some of the sweetest meat of any crustacean, Dungeness crab are a tender and delicate delicacy you can’t get enough of.  The shrimp were almost an oxymoron in that they were much more “jumbo” than “shrimpy.”  They, too, were delicious, even with the profusion of garlic butter.   We handled the potatoes and corn gingerly as they were both scalding to the touch, but oh so good.  When we finally uttered “no mas,” we still had a staggering amount of food left — enough for another full meal from what was left.

4 July 2021:  My friend Schuyler used to rail against three types of food: airline food, hospital food and seafood in New Mexico.  That was before a number of Mexican mariscos restaurants started popping up across the Land of Enchantment.  He fell in love with those.  Had he joined my Kim and I during our second visit to Storming Crab, his opinion of seafood in landlocked New Mexico would probably have led to a pejorative-laced tirade.   Our dinner combo #3 (whole lobster, clams, sausage, red potatoes and corn) was that bad.  The red potatoes were about as soft as a Nancy Pelosi compliment of Donald Trump.  More than half of the clams remained unopened after steaming.  Though unopened clams and mussels aren’t necessarily an indicator that they’e bad, prying them open and smelling them is not our idea of a fun meal.

The most disappointing component of our dinner combo was the whole lobster which my Kim had been so looking forward to.   First, the only utensil we were given was a lobster cracker (which resemble plyers).  No seafood forks or leg sheller knives.  Fortunately my hands are like vice grips and I managed to extricate all the lobster meat sans utensils.  All that hard work should have been rewarded with sweet, succulent and delicious lobster.  Alas, the lobster was rubbery, “old-tasting” and overwhelmed by the butter sauce used on our combo plate.  Tough or rubbery meat is usually the result of a lobster cooked too long.   This is one lobster that should have been thrown back!

5 September 2020: Somehow we allowed our sweet server to talk us into dessert.  Frankly, none of the options were especially enticing, especially considering we knew we’d have to waddle out of the restaurant.  Still, we both had ice cream macaroons which resembled junior ice cream sandwiches.  My Kim’s macaroon sandwiched vanilla ice cream while mine (our server’s favorite) was espresso flavored.  Both were good, but after one bite we’d just as soon have taken them home had they not been guaranteed to melt during our 20-mile trip.

Somewhere in my ancestral lineage were coastal dwellers who enjoyed succulent seafood.  I’ve inherited their passion for the fruits of the sea and may just make Storming Crab a dinnertime dwelling.