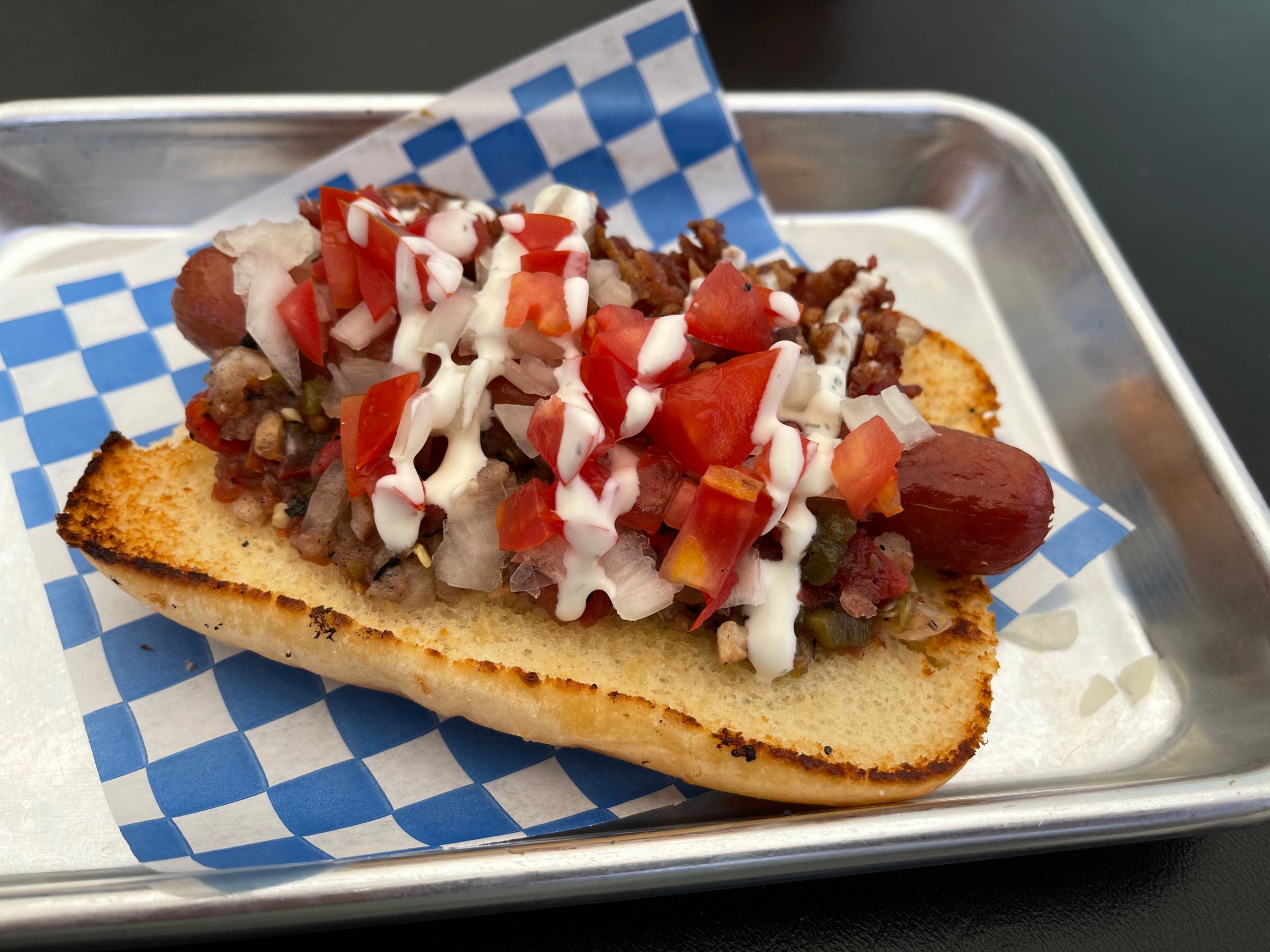 Remember the good old days when the only taboo related to the All American hot dog was the felonious act of adding ketchup.   In the movie “Sudden Impact,”  Clint Eastwood as “Dirty Harry” Callahan declared rather emphatically “Nobody, I mean nobody puts ketchup on a hot dog.”  Barack Obama, the 44th president of the United States was nearly as ardent, asserting that ketchup on a hot dog is “not acceptable past the age of 8.” Not that much later, diehards still consider it a mortal sin to add ketchup to a hot dog.  Nary a dissenting voice, however, is raised at today’s “anything goes” attitude toward hot dog toppings.

Well, maybe almost anything goes.  When I shared Clowndog Hot Dog Parlor’s menu with my dear friend Becky Mercuri, author of the The Great American Hot Dog Book, she declared “I’m not averse to different toppings but frankly, I draw the line at spaghettios and fruit loops.”  She’s not kidding when she says she’s not averse to different toppings.  Her magnificent tome includes recipes for about a hundred hot dogs and their toppings from across the fruited plain, recipes she tested herself.  Throughout the process, she found herself “continually amazed at the ingenuity, creativity and proclivity for turning the humble hot dog into gloriously good eating.”

In 2007 when Becky wrote The Great American Hot Dog Book, hot dog toppings had already begun their evolution (some would say descent) into a catch-as-catch-can melange of ingredients combinations.  Among the more er…interesting hot dogs she wrote about and tested in her home kitchen was Hawaii’s puka dog, essentially a smoked Polish sausage stuffed into a hole drilled into a freshly-baked bun where the sausage shares space with such tropical relishes as a pineapple-mango.

Understanding that one person’s “weird” is another person’s “gourmet,” Hawaii’s puka dog may not even be in the running for most weird hot dog.  In fact, compared with a list of America’s strangest, most terrifying hot dogs, the puka dog is rather tame.  Terrifying might be an apt term for a chocolate eclair hot dog, a brownie corn dog and the “WTF is this” hot dog where raw spaghetti is inserted through chopped hot dogs and boiled.  Fruit loops and spaghettio’s are almost pedestrian in comparison…almost.

Fruit Loops and Spaghettios aren’t the only “gourmet” toppings with which creative diners can adorn their hot dogs at Clowndog.  The list of “New Mexican Favorites” includes calabasitas, chicharrones, pinto beans and of course, chopped green chile.  Under the menu’s “Freak Show” section are such toppings as coconut shavings, peanut butter and grape jelly (BOTVOLR, are you reading this?), chocolate sauce and golden raisins.  Truth or Dare advocates might choose truth rather than try combinations from this section of the menu.

Clowndog’s menu isn’t solely about having its guests do a double-take.  The “Clowndog Creations” section of the menu includes two hot dogs which made it onto The Great American Hot Dog Book as their state’s representatives.  More “normal” toppings such as sauerkraut, yellow mustard, onions and grated Cheddar are also available.  If ketchup is on the menu it escaped my notice, maybe deliberately.  Build your own options apply to more than your hot dog toppings.  You can also choose your dog: all beef, turkey, house-made veggie and bratwurst.  Your choice of buns are: traditional, Chicago-style poppy, gluten-free and corn dog.

As might be expected from a restaurant named Clowndog Hot Dog Parlor, the ambiance bespeaks of owner Rich “Ringmaster” Bartel’s love of the circus.  The restaurant is teeming with circus posters and art.  The front dining room opens up into an expansive covered patio which adjoins an exterior sitting area where patrons can enjoy the heat of the day.  On display on a mural on an exterior wall is a humongous hot dog fronting the restaurant’s name.  The Zia sun’s rays radiate out from the first “o” in Clowndog.

From among the hot dogs (and admittedly we haven’t tried them all) on The Great American Hot Dog Book, our favorite is one that until just a few years ago you could find only in the great state of Arizona.  That would be the Sonoran Dog which Becky describes as “a heavenly Southwestern rendition of the humble hot dog.”  Alas, Clowndog’s version was not served on a crusty bolillo roll, one of the defining characteristics of a true Sonoran hot dog.  And instead of the bacon being wrapped around the hot dog, bacon crumbles mingled with other ingredients (pinto beans, onions, tomatoes, flame-roasted jalapeño salsa, ranch dressing yellow mustard).  If you’re looking for Hermosillo authenticity, this hot dog doesn’t have it.  If you’re looking for a tasty facsimile, this hot dog should do the trick.

Similarly, the Chicago hot dog (sport peppers, dill pickles, tomato slices, diced onions, neon green sweet relish, yellow mustard and a dash of celery salt on a poppy seed bun) may not be exactly like the one you’d find in the Windy City (or even at Albuquerque’s own AK Pizza), but it’s good enough to sate my Chicago born-and-bred bride’s cravings.  Frankly the most obvious absence is the Vienna all-beef frank used throughout the Windy City.  The Vienna beef frank is quite a bit more plump and assertively seasoned than Clowndog’s frank.  Completely assembled, a Chicago hot dog is said to be “dragged through the garden” due to its many toppings.  Request ketchup at any Chicago hot dog emporium and you might find yourself being dragged outside for a well-deserved thrashing.

The backside of the menu lists appetizers, big top dishes and salads, sideshow side dishes and desserts.  Why have fries or onion rings when you can have the bratwurst plate (a plumb brat served with a healthy dose of apple sauerkraut, fresh cut fries and a side of stone ground mustard)?  Ketchup does have its place at Clowndog–with the fries (though my preference is the stone ground mustard).  The fries have the near perfect textural combination of crispy exterior and light, fluffy interior.  The apple sauerkraut has the lip-pursing qualities we appreciate in sauerkraut while the brats is smoky and garlicky.