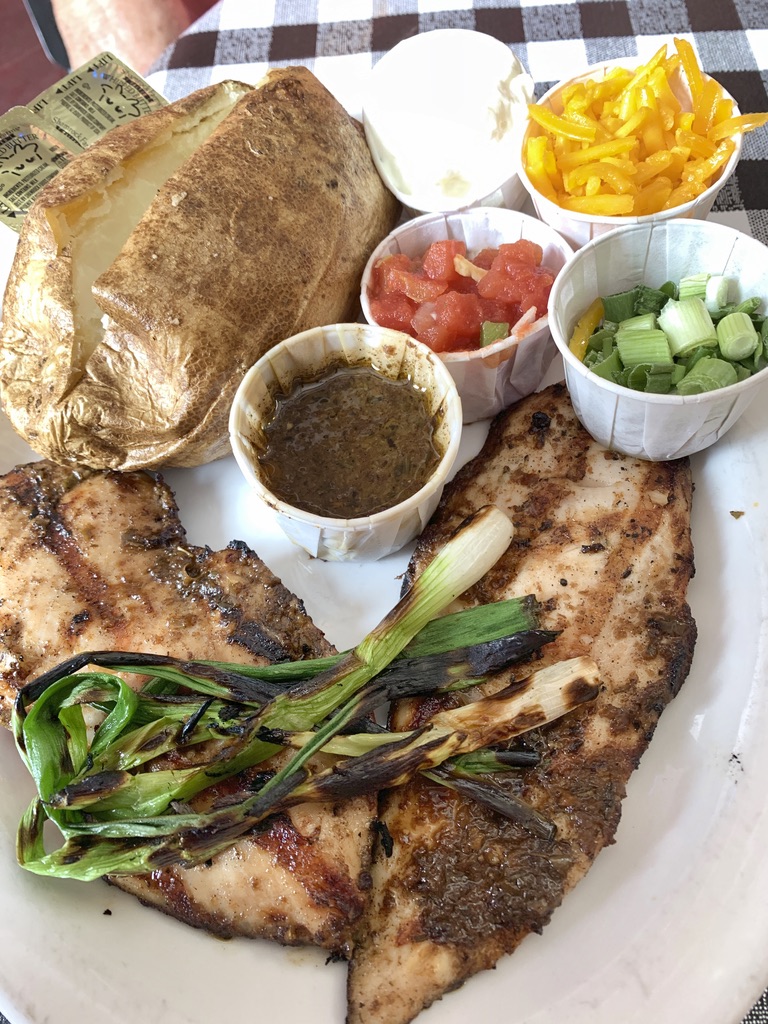 Cowgirl” is an attitude really. A pioneer spirit, a special American brand of courage.
The cowgirl faces life head-on, lives by her own lights, and makes no excuses.
Cowgirls take stands; they speak up. They defend things they hold dear.
~Dale Evans

In a 1980s commercial for Pace Picante sauce, several hungry cowboys threatened to string up the cook for brandishing a foreign-made (translation: not made in Texas) salsa.  “Why, this here salsa is made in New York City!”  “New York City?  Gil a rope!” With such a xenophobic attitude about New York City, you would think those cowboys would have raised a ruckus when a restaurant named the Cowgirl Hall of Fame launched in New York City.  “New York City?  Git a rope!”  The restaurant’s raison d’être was to promote the culture of the American cowgirl through the foods of the American West and Southwest.

On 1 June 1993, the second instantiation of the Cowgirl Hall of Fame opened its doors, this one in a hundred-year-old building in the historic Guadalupe district of Santa Fe.  Known today solely as Cowgirl BBQ, this quaint restaurant celebrates Cowgirls thematically and attitudinally. A portrait library is replete with photographs of National Cowgirl Hall of Fame honorees while the walls feature memorabilia which celebrates the Great American west and the cowgirl. The female wait staff is nattily attired in tight-fitting jeans and western accoutrements such as bandanas and high-crowned, wide-brimmed straw hats. In a 2004 episode of $40 A Day on the Food Network, Rachael Ray called it “Girl Power.”

If you want to catch the nightly musical entertainment or dine with your four-legged fur children, the dog-friendly outdoor patio, weather permitted, is your best bet, but whether you dine indoors or out, you’re bound to catch some of the “City Different’s” different characters. Cowgirl’s is one of the city’s best people watching restaurants, a milieu in which office attire, grunge clothing, skiing ensemble and western regalia seem equally in fashion.  In many ways, the Cowgirl is the antithesis of the stereotype that Santa Fe’s restaurants are uppity and stuffy.  You couldn’t get any more down-to-earth than the Cowgirl.

As for the cuisine, Cowboys and Indians magazine once proclaimed Cowgirl’s barbecue the “best barbecue west of the Mississippi.” That’s only fitting considering that before Cowgirl even launched, one of the principal founding owners placed an ad in the local Santa Fe Reporter and asked what type of cuisine the locals would want. The resounding response was “BARBECUE!” .  Barbecue it’s been for nearly three decades: brisket, chicken, baby back ribs and more.

Perhaps the most incendiary barbecue in the city honors would go to a pulled pork BBQ sandwich simmered in a spicy Salsa Diablo BBQ sauce made with incendiary habanero peppers and piled into a Kaiser roll.  In an episode of the Food Network’s “Heat Seekers” program, hosts Aaron Sanchez and Roger Mooking tested their masochistic mettle by sampling some of the city’s most piquant plates.  The pulled pork BBQ sandwich proved too much for the celebrity chef stars.  Fire-eating New Mexicans will fare better with this salsa.

Cowgirl’s menu has something for everyone including several excellent starters. The Five Pepper Nachos with Salsa Diablo are inventive and delicious–tortilla chips topped with black beans, Jack and Cheddar cheese, red onions, guacamole, pickled jalapeños, black olives, sour cream, and Cowgirl’s extra spicy Salsa Diablo.  You can also ask for shredded barbecue beef as a topper to this mountainous mélange, which in February, 2006 was named by the Wall Street Journal as among the fifteen best nachos in America. El Pinto in Albuquerque was the only other New Mexico restaurant on this exclusive list.  In 2015, the Food Network’s “Best…Ever” program accorded “best barbecue nachos ever!” honors to these nachos.

Another excellent starter is the cabeza de ajo, two heads of roasted garlic planted beside an island of melted jack cheese with tomatillo salsa and toasted baguettes. Extricating the garlic cloves from the steaming hot garlic head is a chore, but the results are quite good.  Top a toasted baguette with a dollop of cheese, a sweet garlic clove or two and some of the tangy tomatillo and you’ve got three potent flavors competing for your rapt attention.  Add a little of the Salsa Diablo to kick it up a notch or ten.

26 June 2020: Considering the flack I caught for proclaiming my admiration for Colorado chile, you might think I’d be wary about admitting to like Texas chili.  Yeah, former New Mexico Senator Pete Domenici once called Texas chili “that inedible mixture of watery tomato soup, dried gristle, half-cooked kidney beans, and a myriad of silly ingredients that is passed off as food in Texas and Oklahoma.”  Maybe he hasn’t had the Cowgirl’s chuckwagon chili (Texas-style ground beef & brisket chili with beans and veggies, jalapeños, red onions, sour cream, cheddar cheese with jalapeño cornbread on the side).  We enjoyed the chuckwagon chili in the form of a Frito pie.  There wasn’t much heat, but plenty of flavor.

26 June 2020: In commemoration of its 20th anniversary, Cowgirl BBQ created a green chile cheeseburger which by its very name implies (according to Wikipedia) “the largest or most significant example of a class, which completely overshadows all other cases in the class.” Called “The Mother of all Green Chile Cheeseburgers,” it’s a pricey behemoth at fifteen dollars. The burger is crafted from a “top secret” blend of black Angus, antibiotic and hormone-free, grass-fed, grain-finished, custom-ground beef, locally raised buffalo and applewood smoked bacon grilled to your exacting specifications and served in a Cheddar-green chile bun with melted brie, chopped green chile and a slice of heirloom tomato. Just ask for “Mother!”

This burger is aptly named.  It is surprisingly good, one of the few green chile cheeseburgers to truly distinguish itself from so many other great ones.  One of the difference-makers is the substantial bun baked on the premises as are other sandwich breads and buns.  The bun is both soft and chewy as well as savory and sweet and an excellent canvas for moist ingredients.  The beef is magnificent!  You won’t want it prepared at any more than medium to maximize its moistness.  The green chile includes a smattering of roasted red chile which has an entirely different flavor profile altogether.  The burger is served with hand-cut truffle oil fries.  Forget ketchup and dip them in the Salsa Diablo.

26 June 2020: Red, orange and yellow flame icons denote menu items–such as chiles and the jerk sauce–which are spicy…or at least they are for tourists.  For New Mexicans, those items are pleasantly piquant plus–hot enough to get our attention, but not so piquant that they water our eyes.  One of the most surprising entrees on Cowgirl’s spicy-hot scale is the Jerk Chicken Platter, two char-grilled chicken breasts marinated in a spicy-hot Jamaican Jerk BBQ sauce and served with rice and beans (the accommodating wait staff may allow substitutions such as a loaded (chives, shredded cheese, sour cream, butter and salsa) baked potato.

The chicken breasts are thin, but perfectly char-grilled with lovely grill stripes running vertically.  My Chicago born-and-bred Kim isn’t quite as enamored of esophagus-eating spices and heat as her volcano-eating husband is, so she asks for the jerk sauce on the side (which leaves plenty of side for me to use as a dip for everything else I can get my hands on).  Jerk, by the way doesn’t refer to an obnoxious person or member of Congress, but is a term for the seasonings traditionally used in the curing process of chicken and beef in Jamaica   The sauce includes a melding of flavorful and piquant spices including Scotch bonnet peppers (among the most piquant in the world), allspice, cinnamon, nutmeg and more.  The sauce has a spicy kick with an offset of sweetness.  This is a very good rendition of Jerk Chicken.

26 June 2020: Dessert offerings include pastel tres leches, the wonderful Mexican tort made with three types of milk. Cowgirl’s version isn’t quite as moist as other tres leches cake we’ve had (milk should ooze every time you press your fork down into the cake), but is served with a rich cream and tart strawberries that make up for its lack of moistness somewhat. Cowgirl’s version is served in a cake-like version not as a pie-like wedge.

26 June 2020: A better option is the flourless chocolate cake with chile served with a side of vanilla ice cream, a dollop of housemade whipped cream and a drizzle of chile-infused chocolate sauce.  The combination of adult chocolate and red chile is one of life’s great pleasures, a dessert that doesn’t have the cloying qualities that rot your teeth at the mere mention.  In addition to an easily discernible chile flavor, this cake has a heavy Mexican cinnamon influence.  That’s a good thing!

In 2019, the Food Network’s Bite Club visited Santa Fe where it staged “Duel in the Desert,” a competition of three of Santa Fe’s best chefs vying for the title of hometown champ. For his secret ingredient Chef Patrick Lambert of Cowgirl BBQ brought jerk spices, Chef Renee Fox of Arable chose hard apple cider and Chef Xavier Grenet of L’Olivier brought the house down with his choice of sweet breads. Judging the event held at the Coyote Cafe’s kitchen were scintillating four-time James Beard award-winning cookbook author Cheryl Alters Jamison and two-time New Mexico Chef of the Year Martin Rios. Despite not plating his buere blanc sauce, Chef Lambert won the first round with a wildly creative creation featuring green apple sweetbreads with Jamaican mop sauce and crispy tostones.

Restaurants come and go and trends change with the times, but with nearly three decades of making Santa Fe customers happy, the Cowgirl BBQ appears to have staying power.  Moreover, it’s got a very interesting and diverse menu that makes every dining experience seem like the first time you dined there.