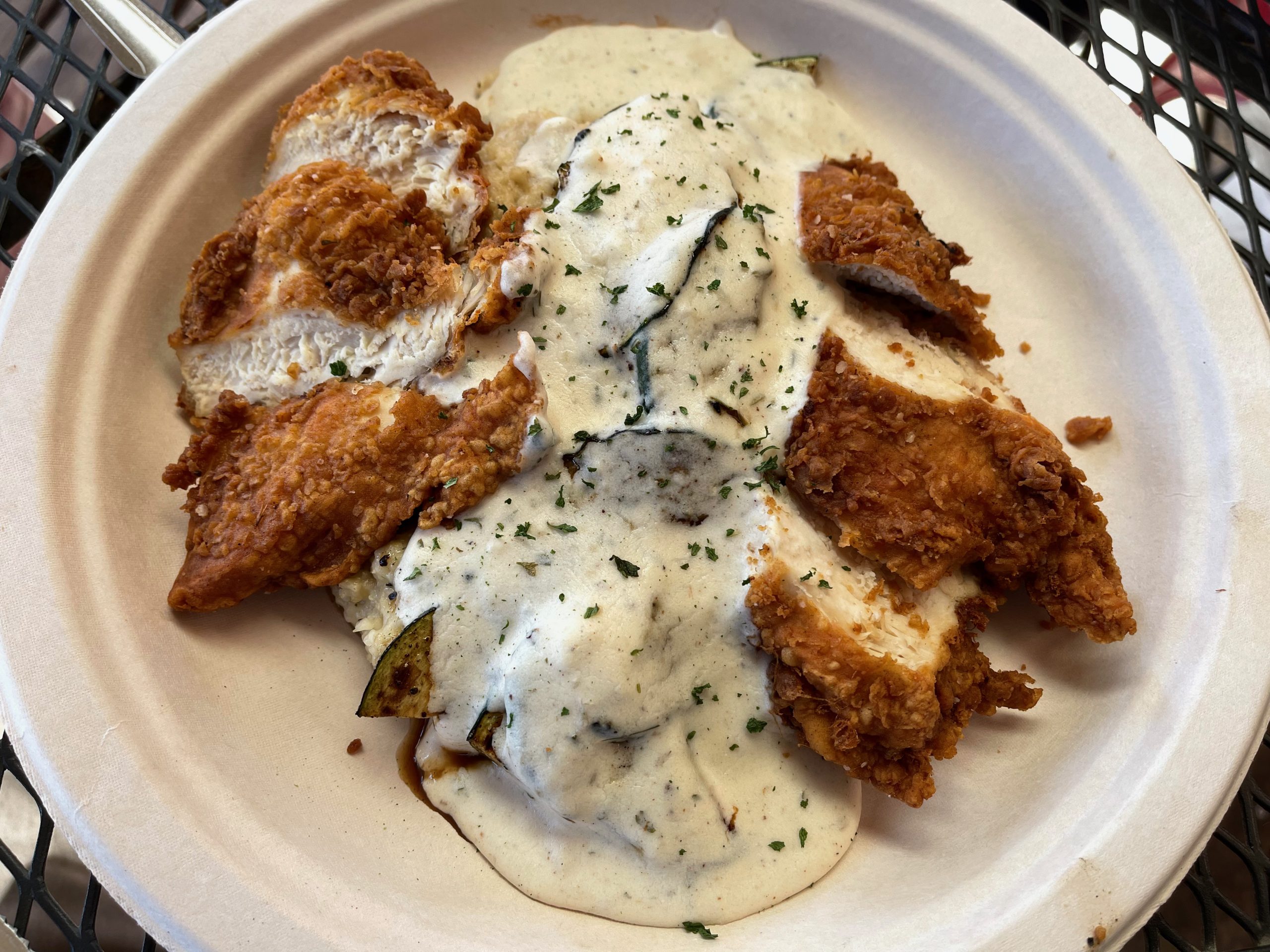 It wasn’t that long ago that if you played “word association” with almost anyone outside the Mason-Dixon line, the first thing coming to mind if you used the term “Southern food” was probably something like “heapin’ helpins’ of hillbilly hospitality.”  During their nine-year run as one of the most popular comedies in the history of American television, the Clampetts, a hillbilly family who relocated to Beverly Hills after finding oil on their property, introduced “vittles” to the American vernacular.  Vittles, of course, meant such “delicacies” as possum shanks, pickled pig jowls, smoked crawdads, stewed squirrel, turnip greens, and owl cakes.  “Weeeee Doggies,” now that’s eatin‘.”

To much of America, the aforementioned delicacies were culinary curiosities–bumpkinly and provincial food no one outside the deeply rural south would eat.  Because the Beverly Hillbillies predated the Food Network and the culinary awakening of America, those stereotypes as to what constitutes Southern food became deeply ingrained in the fabric of American culture.

In 2008, Gary Paul Nabhan published Renewing America’s Food Traditions, one of the most important books written about American food. This terrific tome celebrates the vast diversity of foods which gives North America its distinctive cultural identity, an identity reflecting the vast and unique hodgepodge of cultures.  In an example of gerrymandering Congress would envy, Nabhan remapped North America’s boundaries into thirteen basic food “nations” or culinary regions.  He named each region for its ecological and cultural keystone foods.

These three culinary nations proudly showcase distinctive traditions and ingredients spawned from a veritable stew of multicultural influences which evolved into Southern food as we know it today.  Those influences include Native and African Americans as well as Scottish, French, Spanish and so many others which were ultimately responsible for Soul food, Creole and Cajun cooking, barbecue and more.  To pigeonhole Southern food into a finite category is to not understand Southern food at all.

Having lived in Mississippi for eight years, we knew not to compartmentalize Southern food which we thought we had seen described and defined every conceivable way.  That is, until reading an email from a long-time reader of this blog.  When Robyn Black described a restaurant in Madrid, New Mexico which serves “a kind of continental southern food…not the kind of ya’all southern food, but a lot more upscale” in an ambiance “as comfortable as an old shoe, but a lot prettier,” we were intrigued.

The restaurant Robyn described so invitingly is called The Hollar.  In the vernacular of the South, a hollar is a term for “a small valley between mountains,” an apt description for Madrid itself.  Long-time Country music fans are undoubtedly familiar with part-time New Mexican Randy Travis’s “Deeper Than The Holler” which describes the lyrical way a country boy expresses his love (i.e., “My love is deeper that the holler, stronger than the rivers, higher than the pine trees growin’ tall upon the hill…)”

The Hollar is the brainchild of owner-chef Josh Novak who matriculated at Le Cordon Bleu culinary school in Atlanta, perhaps the heart of the South.  It is situated in the rustically charming wooden structure which previously housed the Tocororo Cafe, a highly regarded Cuban restaurant which we loved.  Robyn assured me that “Tocororo may have been good, but The Hollar which has taken it’s place is stellar!”  She called chef Novak “an outstanding, innovative chef!”

The Hollar has interior seating for fewer than thirty guests, but weather-permitting, the place to dine is really the outdoor patio which seats more than 20 contented guests.  It is an ideal milieu for enjoying an unseasonably warm late autumn New Mexico day particularly when entertainment is provided–and if it isn’t, the people watching is always interesting.  If you’re not into watching people, there are always local and visiting dogs, some of whom actually order from the “Howler Menu.”

More colorful than the interior walls are the clientele, which seemingly typical of Madrid restaurants, is a mix of Bohemians and bikers.  It’s the tourists who seem out of place.  One old hippie (calling to mind a country song by that name by the Bellamy Brothers) who lives in Madrid told us his 13-year-old dog Blue visits The Hollar even without him.  Blue goes from table to table enjoying the generosity of their kindness. With one blue eye and one brown eye, Blue is impossible to resist.

The abbreviated menu is inspired, the “continental Southern” Robyn described.  It’s Southern food with refinement to be sure, but it also includes some of the more simple favorites such as fried green tomatoes and fried chicken.  Lest you think the commonality among everything on the menu is “fried,” the menu also includes entrees you might not necessarily expect at a Southern restaurant–dishes such as a warm goat cheese salad.

Robyn recommends the shrimp stack (not on the menu we perused during our October, 2021 visit) which to her “amazement and palate’s delight” provided “an explosion of flavors to die for, something you might find in a five-star restaurant (without the five-star price or attitude).”   The shrimp stack was available for lunch or dinner, but not for Sunday brunch which as it happens was when Kim and I first visited.  The brunch menu is limited in terms of the number of items available, but limitless in its surprises and the culinary contentment it elicits.

2 August 2009: One surprise is the Hollar Burger with Prosciutto and Provolone, an inspired burger combination that might seem more Italian than Southern were it not for the fact that a biscuit replaces the banal burger bun.  Unlike the crumbly biscuits I make at home, this one holds together surprisingly well despite the moistness of the beef.  In terms of circumference it’s not a big burger, but it stacks pretty high with a thick, juicy beef patty; crisp lettuce; and thinly-sliced prosciutto sheathed under melted provolone.  More importantly than it’s height is its depth of flavor.  It is a rich and delicious burger.

2 August 2009: With today’s inflation the phrase “as tough as a two dollar steak” should probably be replaced by “as tough as a twenty dollar steak.”  An occasional Hollar’s brunch menu offering features a New York Steak and Eggs for five dollars less than that, but this steak isn’t tough in the least.  It’s a tender and juicy steak–about eight-ounces–seasoned to perfection with nary any gristle.  In addition to the two eggs, this plate includes some of the very best grits I’ve ever had.  If you’ve never had good grits, you’ve never had Josh Novak’s smoked gouda grits which have a texture and flavor unlike any grits I can remember, even in Mississippi.

30 October 2021: When Fanny Flagg’s best-selling novel Fried Green Tomatoes at the Whistle Stop Cafe was published in 1987, it inspired many restaurants to try their hand at preparing this Southern favorite.  Most failed miserably, but The Hollar has perfected the formula–fried green tomatoes lightly coated with cornmeal crust so that when you bite into them, only the outer layer is crunchy while the insides retain a juicy green tomato flavor.  One of the ways to appreciate the fried green tomatoes best is on a biscuit with fried eggs.

A starter of fried green tomatoes comes four to an order.  The tomatoes are served with a unique twist, a lavender Bechamel dressing.  At the very least you’ll find this dressing very unique and interesting.  The flavor of lavender is probably best described by Thrive Cuisine: “The strong, sweet-smelling perfume will hit you first. On the tongue, it’s as floral as it smells, very fresh and light. Though not very sweet in taste, lavender is neither bitter nor particularly savory, either. It’s a bit of a cross between a rose and the herb rosemary with elements of mint and bright citrus.”  It’s precisely what we tasted.

This is a sensational salad!  Served with house-made vinaigrette and Ranch dressings, it is a compilation of scintillating ingredients as fresh and delicious as possible.  The goat cheese is mild, creamy and only slightly sour, the way it should be.  It emboldens and complements the other ingredients, especially the berries.  The grilled red peppers are lightly marinated and have a sweet, ripened quality that renders them delicious.  The berries are an interesting and pleasant addition, bringing an element of tartness to the salad.

30 October 2021: One of the highlights of our eight years living in Mississippi was in discovering a region in which fried chicken was practically a religion.  We’ve missed the golden-hued, crispy coating which enrobes perfectly fried and delicate chicken so good it makes adults swoon with ecstasy.  The Hollar’s rendition, though not traditional bone-in chicken, is among the best we’ve found in New Mexico.  An entree of crispy chicken with cheese grits, fresh vegetables and the aforementioned lavender Bechamel dressing nearly elicited carnal responses of delight.  The white meat chicken  was moist and delicious with an exquisite coating reminiscent of the fabulous Southern-fried chicken we enjoyed often.

The smoked gouda cheese grits are outstanding, better than any grits we enjoyed in the Deep South–much better.  I’d make the drive from Rio Rancho to Madrid just for the grits.  Then there’s the fresh vegetables which are tailor-made for the lavender Bechamel dressing.  Aficionados of fried chicken won’t do better in New Mexico than this plate!

30 October 2021:  According to writer Roger Mccredie, “Barbecue makes up one of the four basic Southern food groups, along with fried chicken, biscuits and gravy, and banana pudding.”  The portable smoker in front of The Hollar gives credence to Mccredie’s contention.  The barbecue itself does more than that.  It precedes your approach to the restaurant, beckoning you onward with the wafting of enticing, inviting smoke.  That smoke permeates a house-smoked pulled pork sandwich generously stuffing a pretzel bun.  Slathered in Len’s barbecue sauce with its equal pronouncements of sweet, savory and piquant notes, the pulled pork is of Southern quality.

30 October 2021:  The Hollar offers a white- and red-wine menu, but if (like me) you’re not old enough for adult beverages or you’re craving something sweet for dessert, an excellent choice is a root beer float.  Made with Way 2 Cool root beer (anise, licorice, clove, and mint blend and Madagascar Bourbon vanilla) in Moriarity’s Sierra Blanca Brewing Company, this root beer has a home-brewed flavor and sweetness possible only from natural sugar.  With a nice effervescence, it creates the frothy, fizzy delightful qualities we all love from root beer floats.

Biscuits play a prominent role in the  menu and as wonderful as they are, I can’t help but wonder what a good jam would add. Still, if you’re looking for a refreshing departure from the de rigueur New Mexico brunch standards such as breakfast burritos, The Hollar is a welcome change. If you’re looking for a great meal in a terrific setting, the picturesque drive to Madrid should definitely be on your horizon. My love for this charming restaurant is, as Randy Travis might sing, deeper than The Hollar.