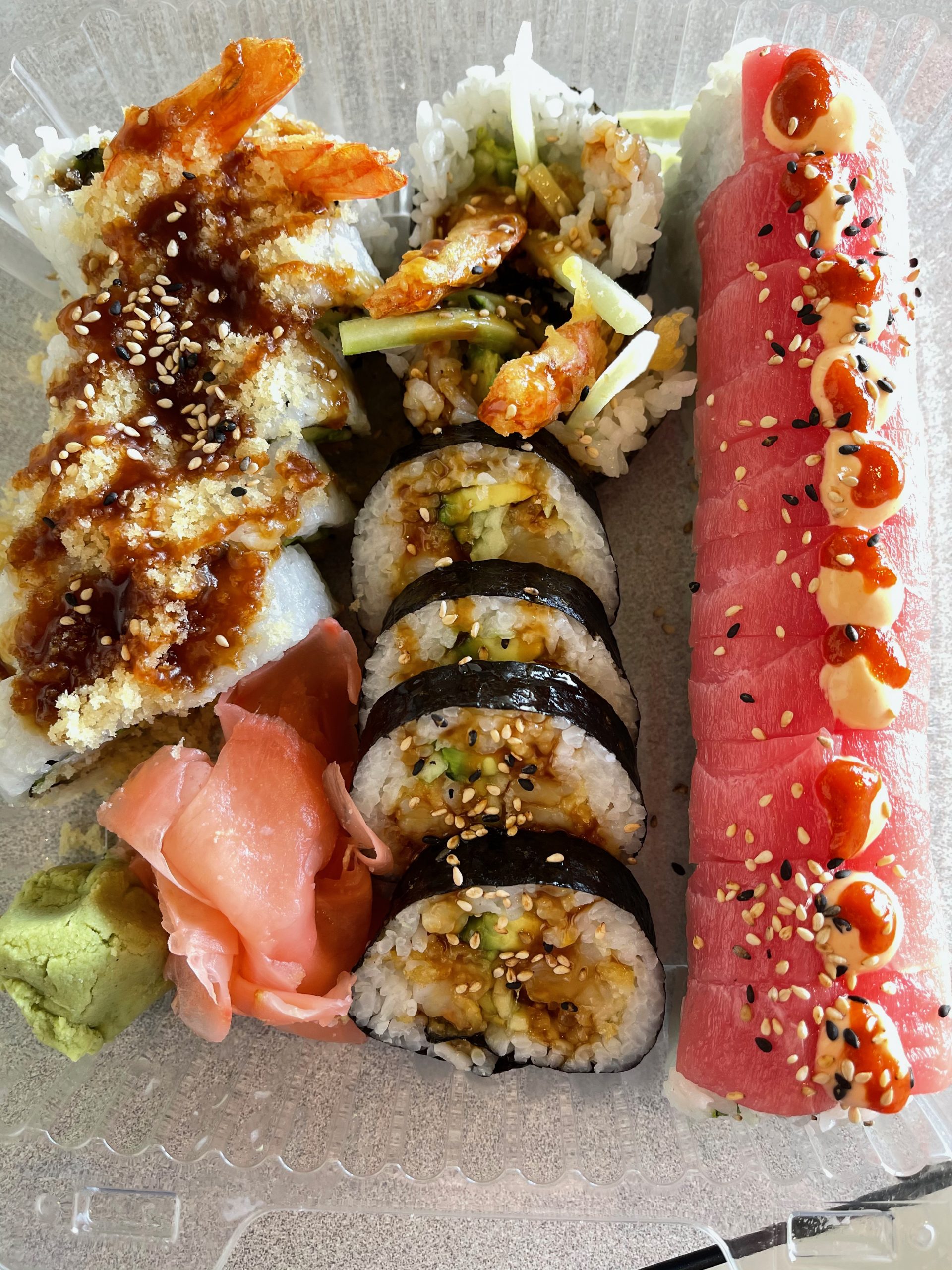 While ikigai (pronounced ee-key-guy) may sound like what grade school girls called me many years ago, in Japanese the term ikigai is a Japanese concept combining the terms “iki,” meaning “alive” or “life,” and “gai,” meaning “benefit” or “worth.”  Though there is no direct English translation, when combined these terms embody “that which gives your life worth, meaning, or purpose.”  Essentially, ikigai is the reason why you get up in the morning.

It makes a lot of sense therefore that the signage for Ikigai, a sushi restaurant ensconced in a Lilliputian pod within the El Vado Motel complex, would be subtitled “a sushi shop with purpose.”  For some of us, sushi gives life worth, meaning and purpose.  Sushi was the reason we got up early on the Sunday morning of our inaugural visit, an indulgence that came very highly recommended by my friend  Howie “the Duke of the Duke City” Kaibel, Community Director for Yelp.

Leave it to that fiendishly clever Howie to contemplate the existential in his Yelp review of Ikigai: “I’m pretty sure I’ll spend the better part of eternity seeking out so-called Balance, and failing miserably. There’s food I consider Healthy and all the rest that doesn’t fall into that category, and really nothing in the middle. Sushi is something I consider Healthy and, bonus, I happen to absolutely love a sushi session. We went after standards, the California and New Mexico roll and I can report solid findings: very fresh, clean and simple, served with a mound of wasabi that I personally finished off, nostrils flaring, crocodile tears in the corners of my eyes–something I can’t say about most of life’s Healthy options.”   Hmm, healthy, fresh, clean and simple with a “life beyond life” premise.  That sounds like a sushi shop not to be missed in this existential plane.

Ikigai is one of six food pods at the pristine El Vado multi-use complex on Central Avenue just east of the Rio Grande. The food pods are diminutive in size (though proffering an immensity of flavors), ranging from 191 square feet to 495 square feet. Among the tenants proffering deliciousness are Rude Boy Cookies, Happy Chickenzz, Street Food Sensations, Buen Provecho (Costa Rican cuisine anyone?), A Heavenly Taste Cakery, Bosque Burger and Ikigai.

Step into the El Vado complex–especially if you’re not necessarily in the mood for any specific type of food–and you might feel like the proverbial kid in a candy store. No matter which purveyor you choose on the day of your visit, opportunities abound for further culinary adventures during future visits. That’s one delicious dilemma you’ll happily wade through. Designers knew what they were doing when they placed so much deliciousness in such close proximity.  Ikigai is the pod furthest from the main entrance to the complex, mere feet from its neighbor pods.

When you arrive at Ikigai, you’ll likely peruse the menu on an exterior wall for a good long while (there’s so many items you’re going to want) but the second you turn toward the door to Ikigai you’ll espy a note informing you that you’ll have to place your order at sister restaurant Happy Chickenzz.  Sure enough, the superbly talented folks who have made chicken sexy and hot again own and operate Ikigai, too.  That means you’re bound to run into co-owner Tony Chalenphonh, a Lao transplant who knows flavor and heat levels very well.

If our initial sushi order–Tony Roll (crab, avocado, and cucumber covered with tuna and green chile), Crunchy Shrimp Roll (shrimp tempura, crab and tempura flank), Caterpillar Roll (eel and cucumber top with avocado and eel sauce) and Rainbow Roll (crab, avocado, and cucumber covered with Chef’s choice of five fish)–is any indication, this little sushi shop creates gigantic flavors.  Though we missed watching the Chef deftly slice fresh fish and arrange it artistically within and atop the vinegared rice, we enjoyed setting our own pace.  The vinegared rice is aromatic and moist, a delicious vehicle for contents therein.  Vegetables and fish are both unfailingly fresh and delicious…and as Howie learned, the wasabi will definitely water your eyes.   We ordered a variety of rolls so as to experience the diverse potential of different sauces, fish and vegetables.  Each sushi roll was special in its own way.

Among the intriguing items on the menu is something called a “sushi burrito.” While it may not be constructed inside a flour tortilla, a sushi burrito offers infinite possibilities–or three in this case: crab, avocado and cucumber; or spicy tuna, avocado and cucumber; or tempura shrimp, green chile, crab and cheese.  Spicy tuna, not something I’ve ever had inside a burrito, was my choice.  In all honesty, the sushi burrito is actually a spicy tuna handroll though instead of the roll being conically shaped, the nori was fashioned in the shape of a burrito and cut in half.  More than any sushi roll we had, the sushi burrito had me wondering if napalm was used in its construction.  It was plenty piquant, deliciously so.

For diners who appreciate the palate-pleasing qualities of noodles, Ikigai offers three options: Yakisoba, Pad Thai and Pho.   Yakisoba (pan-fried noodles with bean sprouts, green onions, shredded seaweed, and your choice of chicken, beef, tofu, or pork. With shrimp or combination for an additional charge) was my Kim’s choice.  Delightful as the noodles themselves are, it’s the unique Yakisoba sauce that makes this dish.   As described on the delightful “Chew Wanna Eat” blog, Yakisoba sauce is “a teeny bit sweet, a teeny bit spicy, a teeny bit salty, and a teeny bit sweet.”  The sauce permeates the slurpalicious noodles, vegetables and protein of your choice.  It would make an excellent aftershave.

While “sushi without the show” isn’t as leisurely as a sushi bar experience, there’s a lot to be said about enjoying sushi served outdoors and mingling with a phalanx of other diners enjoying a preview of summer. El Vado is the perfect place for al fresco dining and Ikigai will remind you that sushi does indeed help make life worth living.