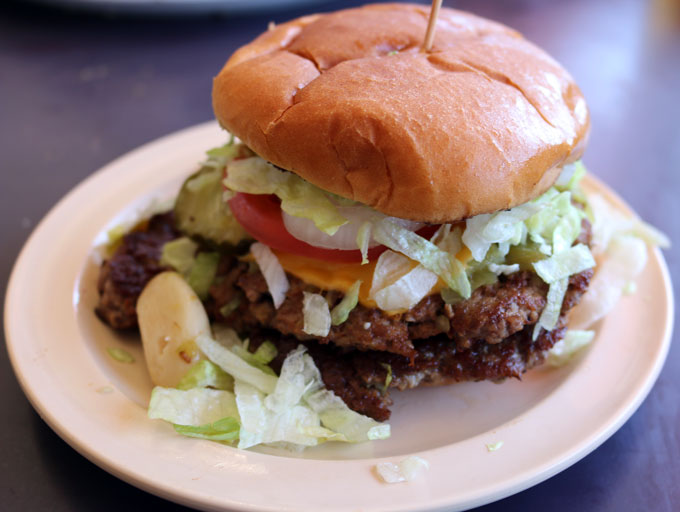 7 March 2017: Over the past five years, the Owl Cafe in San Antonio, New Mexico has been the most frequently launched review on Gil’s Thrilling (And Filling) Blog. From January 1st through April 7th, 2017, the review of the Owl has been launched more often than any other review on 37 occasions. It’s been among the top five most frequently launched reviews 95 times (out of 98 days) since January 1st. The Owl review is the third most frequently launched review (behind the Buckhorn Tavern and Mary & Tito’s of all time. What accounts for the Owl’s popularity? It truly is a timeless institution beloved for its consistently excellent burgers.
San Antonio may be but a blip on the map, but its storied and pioneering history make this sparsely populated agricultural community arguably one of New Mexico’s most important towns.

In 1629, San Antonio was the site on which Franciscan friars planted the first vineyard (for sacramental wine) in New Mexico (in defiance of Spanish law prohibiting the growing of grapes for wine in the new world.) San Antonio was the birthplace of Conrad Hilton, founder of the ubiquitous Hilton Hotels and more importantly, one of New Mexico’s original legislators after statehood was granted in 1912. San Antonio was also the gateway to the Trinity Site in which the first atomic bomb was detonated in 1945. While these events are historically significant, they are also inextricably bound by one common element–the uncommonly ordinary facade that houses the extraordinary, world-famous Owl Cafe.

Conrad Hilton’s father once owned the saloon in which the bar (pictured below) in the Owl Cafe once held prominence and presumably sold the fruit of the vine whose progenitors may have been among New Mexico’s original grape stocks. According to local lore, the fathers of the nuclear age spent much of their free time cavorting at the Owl Cafe where original owner Jose Miera installed a grill and started crafting the green chile cheeseburgers that would ultimately achieve unprecedented acclaim.

Ostensibly, the restaurant was named the Owl because legal gambling was conducted at all hours of the night in the back of the restaurant, ergo by “night owls.” Today feathered fowl are still important to San Antonio’s local economy as thousands of bird watchers flock to the nearby Bosque del Apache Wildlife Refuge to crane their necks for a glimpse of geese, ducks and cranes. The Owl Cafe offers welcome respite from the pleasures of bird-watching.

Rowena Baca, a descendent of the Owl Cafe’s founder and current proprietor of the Owl Cafe, holds on to tradition, preparing the world-famous green chile cheeseburger in much the same way as her grandfather did. The meat is ground on the premises, patties are hand-formed and the ingredients (mayo, lettuce, tomato, pickles, onion cheese and green chile) are unfailingly fresh. On a double meat burger, the succulent meat and melted cheese bulge out beyond the buns. The meat positively breaks apart (the consequences of not using filler and an optimum fat to lean ratio) and its juices make consuming one a lip-smacking, multi-napkin affair.

The green chile is as near to green chile nirvana as you’ll find on any burger in New Mexico. Non-natives might find it a bit hot, but locals think it’s just right. Ironically, it’s not green chile grown within easy walking distance in San Antonio’s famous Sichler Farms, but a special blend of chile from the Albuquerque Tortilla Company. The reason given is that the Albuquerque Tortilla Company’s Chile is already roasted, peeled, chopped and sealed for freshness. Somehow it makes sense.

Another Owl tradition you can’t help but notice is all the dollar bills tacked on the restaurant’s walls. Patrons leave messages or write their names on dollar bills then tack them on any available free space. Once a year, the money is collected and given to charity with more than $20,000 donated thus far.

On an average summer day, the Owl Cafe will serve an average of six to seven hundred burgers. The population of San Antonio rivals that of a larger city during lunch and dinner hours when the Owl’s several parking lots are overflowing with hungry diners. The front dining room will accommodate only a few of them. Fortunately the restaurant has several dining rooms; you’ve got to go through one to get to another.

In 2003, Jane and Michael Stern, rated the Owl Cafe’s green chile cheeseburger on Epicurious.Com as one of the top ten burgers in America–lavish praise indeed for one of New Mexico’s historic gems. It has garnered similar acclaim by other notable critics, having transcended the generations by sticking to a time-tested formula of providing great food at reasonable prices. Disputably there may be better green chile cheeseburgers out there, but there are none more famous.

For more than a quarter century, award-winning journalist Charles Kuralt hit the road on a motor home, crisscrossing the fruited plains where waving fields of wheat passed in review and snow-capped mountains reached for cobalt colored skies. Kuralt loved the cuisine of the Land of Enchantment. In his book America, he declared the Own Cafe in San Antonio, New Mexico “one of the best food tips” he’d ever gotten.

In his celebration of America’s favorite dish, filmmaker George Motz traversed the fruited plain in search of some of the country’s most unique burgers for his 54-minute film Hamburger America which made it to the airwaves in 2004. In 2008, he followed up his award-winning documentary with a state-by-state tome listing what he considers the best burgers throughout the fruited plain. Motz loved The Owl calling it “a friendly place, a family saloon with an excellent burger on the menu.”

The menu isn’t limited to burgers. Savvy diners will order the hamburger steak dinner, a bounteous platter that will fill you up for just over ten dollars. This platter includes a juicy hamburger patty (no charring anywhere), a small mountain of hand-cut French fries, a salad with your choice of dressing (including a pretty good blue cheese dressing), Texas toast and bowls of green chile and beans. Make sure you get the grilled onions atop that hamburger steak. It’s an unbeatable combination.

The other “must have” in addition to an outstanding green chile cheeseburger is a bowl or side of beans with green chile. The aroma of steaming green chile wafts through the dining room as your waitress approaches and you’re the envy of any diner who may not have ordered this favorite of New Mexican comfort foods. The beans are frijoles, whole pinto beans, not refried or black beans you’ll find elsewhere. Ironically, as proud of New Mexicans are to claim green chile as our official state vegetable, we’re often hesitant to admit frijoles share official state honors with green chile. The frijoles at the Owl Cafe will remind you why real New Mexicans love and are proud of their precious pintos.

The Owl Cafe has several other menu items, but rarely do you see anyone foolhardy enough to order say, a hot dog or nachos. It is entirely forgivable, however, to order a patty melt (pictured below), one of the very best of its kind anywhere. One of the reasons this patty melt is oh, so good is obvious. The same wondrous beef patty used on the Owl’s world-famous green chile cheeseburgers is used to create this pulchritudinous patty melt. Two slices of American cheese drape over grilled sweet onions complete the masterpiece sandwiched between two slices of light rye. It’s a fantastic alternative to green chile cheeseburgers.

7 March 2017: The Owl’s French fries are terrific. They’re not the homogeneous, flavorless out-of-a-bag travesty, but are hand-cut and fried to a golden-brownish hue. Texturally, they’re about as perfect as fries can get. They’re crispy and firm on the outside and light and fluffy on the inside. Don’t ever make the mistake of ordering these fries with cheese. Conceptually cheese fries might sound like a good idea, but when the cheese is the gloppy out-of-a-can variety (typically found in ballpark nachos), it’s just blanketing very good fries with cheese glop that’s not worthy to be on the same plate.

Skip the dessert at the Owl and head next door to the San Antonio General Store where Anne Lund serves some of the very best homemade fudge anywhere as well as ice cream (Dreyers), drinks, snacks and sandwiches. Lund actually bought the General Store from Rowena Baca’s daughter and spent about a year perfecting the wonderful fudge (which is made with real butter and cream). Perfect is the operative word for fudge in which you can taste the quality and a whole lot of love from a confectionery artist.

The Owl Cafe is open Monday through Saturday from 8AM to 9PM and is closed on Sundays.