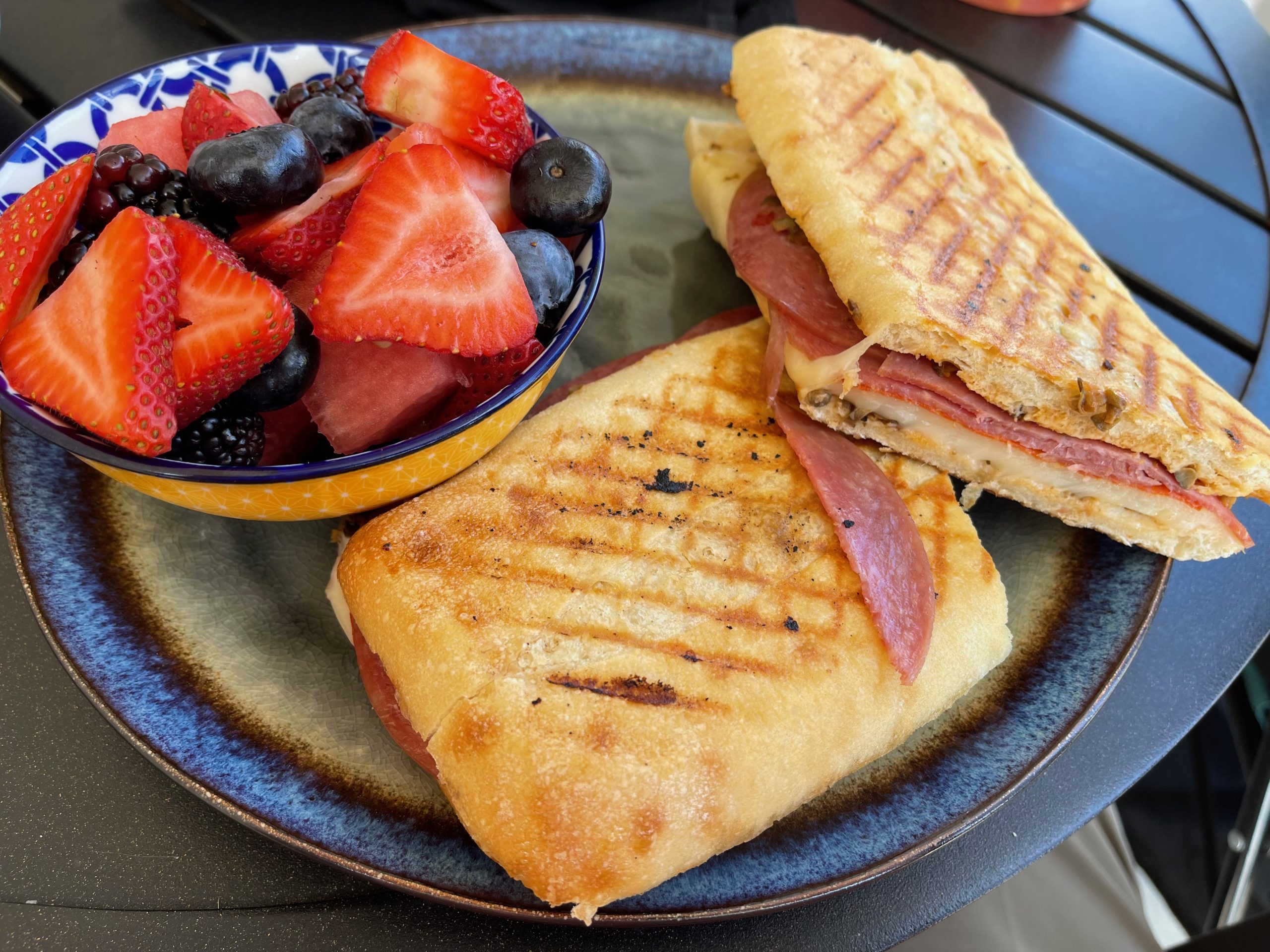 In 2016, The Plough Hotel in North Canterbury, New Zealand banned Lycra-clad customers in an attempt to remove any “unsightly bumps and bulges.”  The hotel owner declared Lycra “unsuitable,” explaining “We get a nice group of customers out here, some elderly folk. When you’re trying to concentrate on your breakfast you just want to see the sausages on your plate.” Then as if expecting a confrontation from the lumpy, bumpy bikers, he issued a challenge: “If there’s hordes of cyclists outside threatening to bash us with their bike pumps we can always barricade ourselves in, we’ve got a bit of food and drink here so we should be able to outlast them.”

Lycra bike wear may not be de rigueur at Albuquerque’s Kickstand Cafe, but you just might feel overdressed if you didn’t squeeze into the form-fitting attire for a visit to the Alameda cafe.  And surprise, surprise, “elderly folk” whom the prudish New Zealand hotel owner tried to shield from “sausages” and other shapes and contours that leave little to the imagination were well represented among the guests wearing second-skin-apparel.  It didn’t appear any guests perceived bike shorts to be ribald regalia.  Nor did we notice any ogling or lusty leering.

What you will notice about a meal at The Kickstand Cafe is just how much you’ll feel at home.  If the parking lot seems rather sparse, it’s because many of the guests actually peddle their way to the cafe.  My excuse for not doing so is that my bike doesn’t have a basket in which The Dude can ride comfortably.  My excuse for not owning Lycra attire is that I don’t want other people laughing at me.  Besides, The Kickstand Cafe’s doesn’t need me to live up to an invitation to “send us your jiggly, your sculpted, your lumpy masses squeezed into Lycra and yearning to breath free.”

When we pulled in to The Kickstand Cafe, we noticed huddled masses yearning to coo and caw at Cooper, the owner’s puppy who’s beating Parvo.  Cooper is all personality, a furry, four-legged bundle of love and energy.  With Cooper greeting guests, it’s no wonder so many are heading to The Kickstand.  Well, Cooper and a welcoming dog-friendly patio with plenty of space for canine companions.  Then there’s the food: a profusion of pastries, surfeit of sandwiches, bounty of burritos and lakes of lemonade to sate hungry bikers (and those of us who could probably disprove that tired old adage of “just like riding a bike.”

Restaurateurs will tell you the three critical elements to success are location, location and location.  To that end owner Emily Kitterman knew what she was doing in launching her cafe within easy pedaling distance from the Paseo del Bosque Trail.  The Duke City’s premiere multi-use trail meanders from the north to the south edges of the metro area through the Rio Grande’s cottonwood bosque.   If you haven’t got a bike when you get to Kickstand, you might be able to rent or buy one next door at Kickstand Cycles.

Whether you load up on calories before a hard ride or reward yourself afterwards, Kickstand is your hook-up.  Open for breakfast and lunch every day but Monday and Tuesday, it’s got a menu sure to please athletes and athletic supporters alike.  One full page of the two page menu is devoted to beverages: smoothies, lemonade, specialty drinks, espresso and coffee.  When many restaurants have lemons, they use them for tea and dispense lemonade from a fountain spouting Coke products.  Kickstand uses lemons for its lemonade.  Would you believe ten different lemonade flavors: classic lemonade, strawberry, watermelon, mango, peach, blue raspberry, blood orange, blueberry, pineapple and cherry?  I’ve seen home aquariums with less fluid than a cup of Kickstand’s lemonade. Each cup is so much more than lemonade and ice.  The watermelon lemonade, for example, is brimming with chunks of watermelon and lemon, making for a tantalizing tart treat sure to quell your thirst after a long ride.

The second page of the menu is categorized into breakfast and lunch favorites: burritos, gourmet breakfast sandwiches, oatmeal, quiche, breakfast street tacos, sandwiches and sides/add-ons.  What you won’t see on the menu, but will get an eyeful when you place your order is some of the very best looking pastries and donuts in town.  They’re baked by Santa Fe’s Chocolate Maven, one of the City Different’s most highly regarded restaurants.  On display within a pulchritudinous pastry case on the Sunday of our visit were Oreo chocolate cake, apple fritters, donuts, turnovers and more.  It’s a wonder there weren’t tongue marks on the pastry case.

Apple fritters are among my all-time favorite pastries. Resplendent with chunks of sliced apples and glazed with glossy white icing, this classic cousin to the donut tastes like something an extremely talented and inspired abuelita would have whipped up.  This apple fritter has a homemade vibe that is so homely and American.  My Kim’s vanilla cake donut with chocolate swirl stripes was sweet and rich.  Because we arrived at nearly 2:30 and the cafe closes at 3PM, our server approached us toward the end of our visit and offered us some of the left-over pastries.  I joked that we might have to return every Sunday just before closing time.

Though in a breakfast burrito mood before arriving, seeing some of the sumptuous sandwiches leave the kitchen bound for anxiously awaiting diners, my mind changed quickly.  Eight sandwiches adorn the menu, each served with your choice of kettle chips, potato salad, quinoa salad or fruit.  My choice was the Italian Press Sandwich, a pressed panini constructed with pepperoni, ham, genoa salami, mozzarella and tapenade.  It’s a just right sandwich–neither too thick or too thin with panini that won’t cut into your gums when you bit into it.  Best of all, it’s absolutely delicious with meats of varying degrees of saltiness and sharpness and mozzarella as the perfect foil.  The tapenade, made with olives, is salty, too which also makes the choice of mozzarella a smart one.

One of the many things I love about my Kim is her innocent ways of defying convention.  She wanted a Cubano, but she wanted it with sourdough bread (not an easy bread to grill and press).  To be fair, the Kickstand offers several types of bread.  At least she wanted her Kickstand Cubano slathered with yellow mustard, piled with sheets of Swiss cheese, tangy pickles and smoked ham.  Unfortunately the Kickstand had run out of ham, so Genoa salami was substituted.  It was a good sandwich, but we miss the crispy exterior, cheesy interior, grilled and press perfection of a true Cubano.

The Kickstand Cafe is the place I’d hang out if I was a biker though you can rest assured you won’t catch me in Lycra.  The world isn’t ready for that!